Travel to the islands of myth and adventure

The seas of myth, freedom and the big blue. The Aegean and the Ionian. The epicentre of the Eastern Mediterranean, with 6,000 islands and islets. There are endless ways to get to know them: sailboat, yacht, catamaran. Scuba diving, water sports, competitive sailing, rallies in the Aegean. Revitalising experiences, full of luxury, relaxation, authentic moments in traditional fishing ports, cosmopolitan Greek islands and unforgettable fun. From March until October the Greek seas are an open invitation for all! 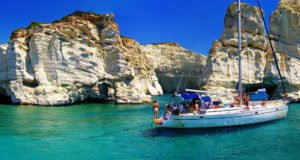 Sailing in the Greek islands: freedom and adventure

Every boat trip in the Aegean, Ionian, Argosaronic and around the Peloponnese, is a trip to Greece’s ancient and modern history. The famous prehistoric settlement of Akrotiri in Santorini, and the cavernous villages of the Caldera with its inspiring architecture: Fira, Imerovigli, Oia. The Proto-Cycladic settlement of Skarkos in Ios, and its classical Cycladic Hora. Delos in its entirety, the most significant archaeological site in the Aegean.

Nearby Mykonos, synonymous with luxury and non-stop fun. Rhodes, with its Old Town and Lindos, and their mediaeval ambience. Knossos and Faistos in Crete, as well as the old cities of Hania and Rethymnos. Corfu, with its Venetian charm, whose town has been declared a Unesco World Heritage Site. Its imposing fortresses are considered masterpieces of fortification. And of course, Attica, with Sounion and Athens’ awe-inspiring Parthenon and world-renowned New Acropolis Museum. Drop your anchor and explore. Every destination has a fascinating history.

Wherever the wind blows

In Ancient Greece they were called Etesian, today the Greek winds are called Meltemi. They are the seasonal north winds that reach 5-7 Beaufort, and exist in the Aegean from May until September. They are the reason windsurf and kitesurf enthusiasts love coming here. They are the magnet that attracts competitive sailors, as they provide ideal sailing conditions, and reduce the distance between the Aegean.

This site uses cookies. By continuing to browse the site, you are agreeing to our use of cookies.

We may request cookies to be set on your device. We use cookies to let us know when you visit our websites, how you interact with us, to enrich your user experience, and to customize your relationship with our website.

Click on the different category headings to find out more. You can also change some of your preferences. Note that blocking some types of cookies may impact your experience on our websites and the services we are able to offer.

These cookies are strictly necessary to provide you with services available through our website and to use some of its features.

Because these cookies are strictly necessary to deliver the website, you cannot refuse them without impacting how our site functions. You can block or delete them by changing your browser settings and force blocking all cookies on this website.

These cookies collect information that is used either in aggregate form to help us understand how our website is being used or how effective our marketing campaigns are, or to help us customize our website and application for you in order to enhance your experience.

If you do not want that we track your visist to our site you can disable tracking in your browser here:

We also use different external services like Google Webfonts, Google Maps and external Video providers. Since these providers may collect personal data like your IP address we allow you to block them here. Please be aware that this might heavily reduce the functionality and appearance of our site. Changes will take effect once you reload the page.